Welcome to the November edition of The Maclendon Monthly. In the spirit of this year’s election, we wanted to switch your focus from the election’s symbolic elephant and donkey to the market’s symbolic bull and bear. We decided to hold our own debate allowing each side to explain their views on the economy and illustrate some of the challenges facing today’s investors.

Maclendon Moderator: “What are your views of Quantitative easing?”

Bear: Print all you can… and then print some more

Quantitative easing? Are you referring to the Federal Reserve creating dollars out of thin air? QE started about four years ago, in late 2008. Since then, we have had two rounds of quantitative easing and are undergoing an open ended third round, leading to the question: how much longer? According to Fed Chairman Ben Bernanke, monetary easing will continue until the job market shows “substantial improvement’.” The Fed Chairman claims that the first two rounds of quantitative easing generated 2 million jobs, which totaled $2.3 trillion, but I question, how much can you print until we are out of paper?

Artificially inflating asset prices gives investors a false sense of confidence and ignores the underlying fundamentals. The “sugar rush” induced by the Fed will eventually wear off and fundamentals will prevail as stocks revert back to these levels. Michael Mckee, Economics editor for Bloomberg, gives us some food for thought: On October 24, 2012, QE III was forty-one days old. Forty-one days into QE I, the S&P was up 80 points or 10.3%; and forty-one days after QE II, the S&P was up 46 points or 3.9% higher. On October 24 however, the S&P opened down 24 points or 1.7% lower. QE keeps showing lower marginal effects each time without improving the underlying fundamentals of the economy.

Bull: Floor to the economy, Confidence to the Markets

The economy has rebounded since the inception of QE in late 2008. GDP is about 10% higher than it was before QE I. QE has not only supported the economy from entering a recession, but has spurred confidence in the markets, as shown on the graph below. The S&P has risen 65% since QE I. 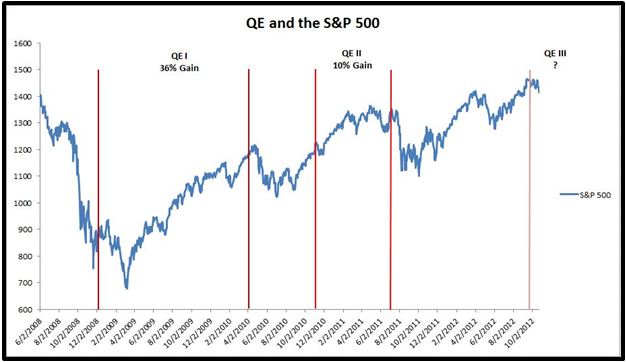 The Fed continues to take an accommodative stance; the most aggressive we have ever seen, by pledging $40B a month in bond purchases until “the job market improves significantly.” QE III should continue to support the markets and strengthen the economy further as the old saying goes, “Don’t Fight the Fed.”

Maclendon Moderator: “How do you view China and the continued role it will play in financial markets?”

Everyone on the street has an opinion on China, but they vary significantly. Many are bearish and believe China will experience a hard landing; others, bullish on the country, believe the slowdown is temporary, and that China will recoup its position as a growing giant.

Although it is evident that China’s economy is experiencing a slowdown, China posted a growth rate of 7.4% for the third quarter. At 7.4%, China currently holds one of the highest GDP growth rates in the world for developed countries. And although it is slower than it was a year ago, it is still many times higher than the US’s.

China has been showing signs of a renewed expansion in business activity. The HSBC Composite Output Index posted 50.3 in September, up from 49.9 in August. This is important since a PMI (Purchasing Managers Index) of more than 50 represents expansion. The HSBC Business Activity Index, which measures activity in the services industry, posted 54.3 in September up from 52.0, the fastest rate since May. This growth in the services sector points to an increasing consumer confidence. 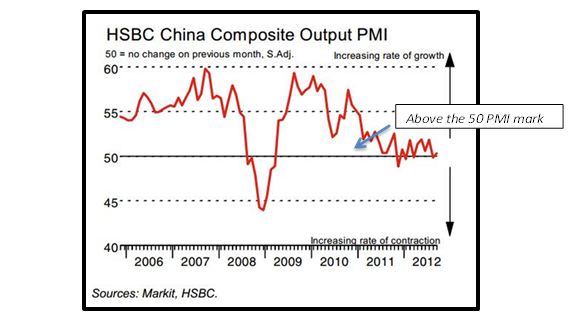 China has also implemented stimulus policies to aid the economy; such as infrastructure projects, reduced fees on businesses, tax breaks, and incentives to consumers to encourage spending. Currently, a major priority for the economy of the giant is to boost trade and expand domestic consumption which will result in securely positioning them to remain a world power.

Bear: Slow growth is slowing down.

Third quarter growth for China was 7.4%, down from 7.6% in the previous three months. This represents the seventh consecutive quarter of economic slowdown for China and the slowest pace of growth in more than three years. This has been primarily due to lower demand for China’s exports. The continued crisis in the Eurozone and sluggish economic growth in the US are increasing the fear of a further slowdown in the coming months.

China has also seen surging labor costs. Recently, labor costs have surged by 15 to 20 percent annually. To obtain a clearer picture, in 2000, Mexican labor was more than three times as expensive as Chinese. Today, it costs about the same to hire a Mexican worker over a Chinese worker.

This has led to less foreign direct investment. According to a survey by the Capital Business Credit, A US-based financial consultancy firm, 40 percent of major companies interviewed said they have plans to move factories from China to other locations weakening their strength in the global markets.

Maclendon Moderator: “What will the effects of the fiscal cliff be on the markets?”

Bear: Pull out those parachutes and get ready to pull the cord.

If the White House and Congress fail to find solutions or compromise on the fiscal cliff, we could see a contraction of about 4% of GDP. Big tax hikes and spending cuts would be allowed to take effect at the beginning of next year to the tune of approximately $600B dollars. If all the Bush tax cuts expire, this would raise, among other things, the top tax rate on ordinary income from 35% to 39.6%, increase the tax on dividends from 15% to 39.6%, increase the tax on long-term capital gains from 15% to 20% and increase the estate tax rate from 35% to 55%, with the exemption amount falling from more than $5 million to more than $1 million. This would lead to higher unemployment, a depreciating dollar, reduction of disposable income, and falling stock prices with some estimates ranging from 20-30%. 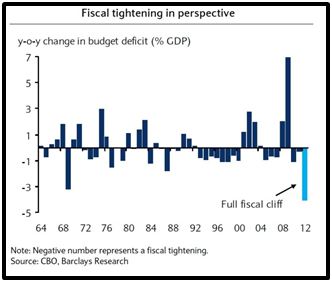 Bull: Every cloud has a silver lining

Legislation to avoid the full impact of these changes will likely come after the election. Congress and the White House will in all likelihood move the issue into 2013, extending the tax cuts for another 6-8 months. As a complete avoidance of the fiscal cliff is unlikely, any form of compromise will likely drag the economy and stall job growth.

If lawmakers do determine a solution that both prevents the U.S. from falling over the fiscal cliff and addresses the fiscal deficit, it would likely provide a huge stimulus to the economy. By removing the cloud of uncertainty that has been plaguing investors and business owners we could see broad market indices hit new highs and a resurgence of stock prices.

Summary: Making Cents of this Menagerie…

Donkey/Elephant… Bull/Bear – at the end of the day the entire menagerie has to focus on strengthening our economy. While discussion points like QE, China, Fiscal Cliff may seem like esoteric concepts in your life, the reality is that they directly affect Unemployment, Inflation, Interest Rates, Small Businesses, Taxes and of course the Stock Market.

Regardless of the election outcome, the markets will react based on how the President addresses the aforementioned issues. In order for the markets to go higher they need to have a clear sense of direction. It is not known how long it will take to resolve many of these macro-economic issues. What we do know is we are not in our first period of economic uncertainty in this country. History has shown the resiliency of the American people and how this great nation has prospered over the past 250 years. Democracy and capitalism are the foundations for this prosperity and we believe they will facilitate it for generations to come.