Posted at 17:56h in Maclendon Monthly by kaitlyn

Working with entrepreneurs we are constantly surrounded by innovative people and ideas. One of the main drivers for these entrepreneurs is the desire to make a positive and impactful change on industries and societies. Steve Jobs once said, “Innovation distinguishes between a leader and a follower.” Innovation, big or small, is at the foundation of successful societies and companies.

One industry that we are seeing an abundance of innovative new ideas is in energy. The need for new and innovative ideas in the energy sector has been driven by the fact of our ever growing population and consumption. According to the International Energy Agency (IEA), global energy demand is set to grow by 37% by 2040. The need for renewable sources of energy is more important than ever. As world populations grow our need to consume more energy is inevitable. We must create a reliable and clean alternative energy source that is renewable and safe for the environment. According to the Energy Information Administration, “renewable energy refers to resources that are replenished in a relatively short period of time.” Renewable energy sources include hydropower, wood biomass (used to generate heat and electricity), alternative biomass fuels (such as ethanol and biodiesel), waste, geothermal, wind, and solar. 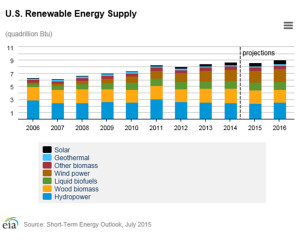 Advances in technology and political support must also be present to ensure the future development of these energy sources. Investment in worldwide renewable energy reached $270 billion last year, up 17%. In the United States, federal investment tax credits for solar projects were enacted. In the past 10 years, 80 % of Europe’s investment in energy went to renewables. There is also increasing acknowledgment in C-suites that global warming poses a serious potential economic and financial risk. Further supporting the cause is the backing of major corporations in the development of renewables. Google has pledged more than $2 billion to projects and uses renewables to power over 30% of their operations. Apple announced an $850 million deal with First Solar in February to build a 1300 acre solar farm to power all its California operations: stores, offices, headquarters, and a data center. Corporations are implementing renewable energy initiatives by using a multi-pronged approach. This approach includes purchasing renewable-energy certificates (RECs); signing long-term (12-25/year) power-purchase agreements (PPAs) with independent producers or utilities, and building on-site assets that link directly to owned buildings known as “behind the meter” generation. The level of growing interest and a return to optimism, with a willingness to innovate has not been seen in several years. 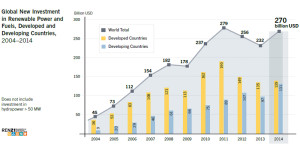 Leading the innovation charge in renewable energy growth is solar. Helped by tax incentives and technology advances that make solar cells more efficient, the United Stated has installed over 1 million solar systems, according to a report by the Solar Energy Industries Association and GTM Research. This follows a 36% increase in solar installations over last year. Although solar growth has historically been concentrated in roof top panels, c 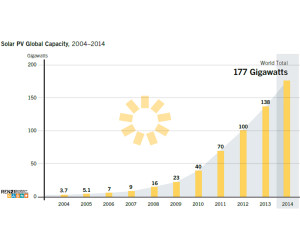 But not all renewable energy growth is centered in the United States. China has become a superpower. China has a commitment to source 30% of electricity from renewables by 2020 while being faced with becoming the largest carbon emitter. Other motivations are its strong national interests to tackle persistent air pollution problems, limit climate impacts, and expand its renewable energy job force. China’s current electric power capacity stands at 1,360 GW, with hydro, wind and solar accounting for 424 GW – a total that grew by 51 GW in 2014. China is quickly becoming a world leader in solar power. According to the International Energy Agency, the country produces over 60% of all solar panels and it gained more solar capacity than any other country in the world last year. China invested $83.3 billion dollars last year into renewable energy, more than any other country, according to a report from the UN which was more than double what the Unites States invested as the close second.

Although the recent fall in commodity prices has given reason for many to believe that renewable energy sources will fall out of favor, this has not stopped investors. Today, retail investors have many options to invest in renewable energy. There are mutual funds, ETFs, and private funds that focus solely on renewable energy. Renewable energy assets are also available in REITs and Yieldcos which is a dividend growth-oriented public company, created by a parent company that bundles renewable and/or conventional long-term contracted operating assets in order to generate predictable cash flows. In such a low rate current environment, these investment have garnered attention with income investors.

We continue to believe the renewable energy space will expand and we look forward to the advances in technology. As the desire for more sustainable forms of energy build, the backdrop for renewable energy infrastructure looks positive. Government spending allocations and advancements in efficiency could forever change the way we obtain, harness, and use energy.