Posted at 13:35h in Maclendon Monthly by kaitlyn

Benjamin Franklin once said, “There are only 2 certainties in life: death and taxes.” Taxes are unavoidable and affect many aspects of our lives. The influence of taxes stretches far beyond just our bank accounts. Taxes are essential for a country, government, and municipalities. These revenue streams support everyday operations and long term initiatives. Taxes influence a wide range of our decisions whether to buy or sell or influence how we vote and who we vote for. Income, property, capital gains, imports, and estate taxes; the list goes on. In its earliest form, taxation of some kind has been around since as far back as 98 B.C. Written in Greek on a piece of pottery, an Egyptian tax receipt shows a bill for more than 220 pounds of coins. The receipt stated that a person and his friends paid a land transfer tax that came to 75 talents, with a 15-talent charge added on. Fast forward a couple thousand years and taxation is now a universally accepted principle.

As Americans across the country file their taxes by the April 15th deadline, they either hope for a refund or curse how much additional tax they owe. With the recent increase in taxes due to the expiration of the Bush era tax cuts and elimination of previous deductions, some upper-income Americans feel their taxes are too high. The perception of taxes being too high could be attributable to the increasing discontent with the federal government, or new laws such as the Affordable Care Act. Whatever your political take on taxations might be, we wonder if there is a better system. Is there a tax system that works best for our country? This has been a highly debated question since the beginning of taxation. Although there is no universally accepted best way to tax, how much to tax, or who to tax what, we thought we would take a deeper look at various systems across the world and compare and contrast against our own. You may find the grass isn’t always greener.

In the United States, our income tax structure is based on each individual’s level of income. In the simplest form, the more you make each year, the more you will have to pay in income taxes. This is known as a progressive tax system. Currently, the highest individual tax bracket is 39.6%. In addition, a 3.8% Medicare surtax is levied on the lesser of net investment income or the excess of modified adjusted gross income (MAGI) above $200,000 for individuals, $250,000 for couples filing jointly, and $125,000 for spouses filing separately. It is easy to understand why many people believe there has to be a better way.

For those of you who think that sounds high, the United States once had a top income tax rate of over 90% (see chart) in the years after World War II. We are currently at the hightest tax levels sinc ePresident Reagan. 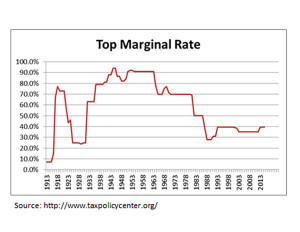 However, this does not mean that there are no taxes at all. An income tax has been enacted by each of the seven Emirates, but in practice, the enforcement of these taxes is restricted to foreign banks and to oil companies. Foreign banks are taxed at 20% of their taxable income in Dubai. Oil companies in Dubai pay a flat rate of 55% on their taxable income. Taxes on goods imported from outside the country are in place, called Duty Rates. These rates in UAE vary from 0% to 100%, with an average duty rate of 4.61%. However, some goods can be imported free of duty, such as laptops and other electronic products. In addition to these taxes, there is a 5% tax on residential rental payments, 10% for commercial premises, and a 5% tax on some hotel services and entertainment. Local citizens also contribute a small percentage of their income towards social security. There is also no sales tax, but there are taxes on alcohol and other products that are considered vice or haram (proscribed by Islamic law). Therefore, even though the UAE does not make their citizens pay an income tax, there are other taxes in Dubai that have allowed the Emirate to become one of the most luxurious and culturally rich city-states in the world.

Every country in the world has implemented their own system of taxation on its citizens and businesses. The U.S. is no different; we are still relatively tax-friendly with a marginal tax rate of around 28% on average income workers. American citizens have the highest income per hour worked of any nation surveyed. By any objective measure, the United States and its relatively low tax rates offer the best of both worlds — reasonable social safety nets, and extraordinary economic capacity stemming from essentially free market policies. It is impossible to determine which tax structure is the ultimate solution for every nation, but in reality taxes should not be viewed as a financial burden, but as an appropriate price to pay for a functioning society. No matter what side of the tax spectrum you might fall, your tax dollars are required for the survival of a nation’s government, and all of its programs, expenditures, and subsidies. Without taxation our great country would not be what it is today.